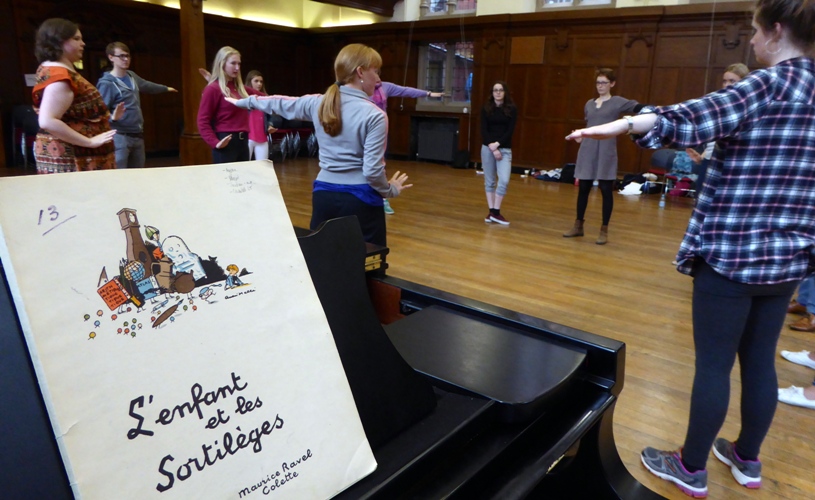 Another day has ended and with it another rehearsal in the lovely Kings Hall at Newcastle University. Our first performance is just over a month from now and we won’t meet again until we go into production. Slightly terrifying, yes, but in the hands of our brilliant team today we saw the first glimpses of what it could look like together as a whole performance. As the music and movement start to merge, any trepidation turns into excitement of what this will become.

We started our session today with a bit of impromptu gesturing, assigning an action to each word we sang. Thinking of something for the word “you” may be easy; just point to another person. But the “Ding, ding, ding” of a broken clock? Well, our tenor expressed just this with an explosive opening of a hand, slowing down to nothing but a flick as the clock neared its last tick. There was more than just comedy value behind this method though, ensuring that every word of French was perfectly understood – even when we weren’t the ones singing. Things got very exciting as we started to take this further, with our tea cup even improvising a full dance for us! It is amazing to see what things can grow so organically from the smallest of gestures.

Next came some full on choreography. I especially loved the angular, jarring movements in the maths scene. Here Enfant is haunted by the homework he refused to do, the chorus of vicious numbers circling and taunting him. Becoming a representation of arithmetic on stage is certainly no mean feat, especially when the maths you are chanting don’t make any sense. Two times six? Thirty one! Five times five? Fourty three! This is one maths book you don’t want to read – no wonder Enfant starts to cry “Oh, my head, my head!” when it’s all over. But the intense focus and intention behind each of our movements helped to make sense of the menace behind the numbers and the nonsensical patterns of words.

Gesturing made sure we understood each word we were singing and gave us a reaction to others, the choreography brought to life the characters and intentions, especially in the chorus numbers, but finally Dena, our choreographer, tried to distract us from the musical run where we semi-staged it by ourselves in situ by calling out numbers corresponding to actions. Having to mime “heads, shoulders, knees and toes” whilst counting beats until your entry and interacting with the other characters certainly makes sure you know exactly wheat you are doing and really solidified all the hard work we have been doing on the music in between rehearsals.

The last hour of the rehearsal was a triumph. A full run through of the opera with improvised movement and realisation of characters. Our tea cups were dancing, shepherds parting and cats grooming. If we can create something like that in such a short space of time I can’t wait to find out what happens in production week.