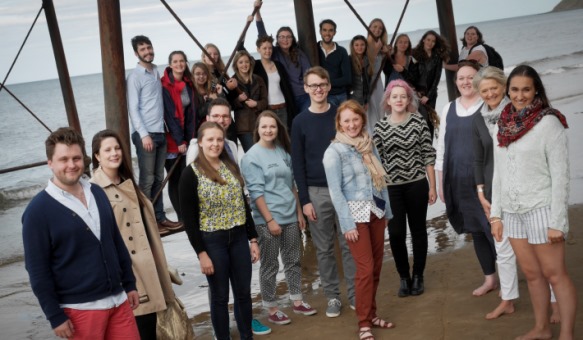 I’m glad to be back in the lovely Saltburn-by-the-Sea for the second Samling Academy Opera. Happy memories of Albert Herring, now to be entwined with a totally different but equally fun experience in Ravel’s anthropomorphic wonderland. I can’t believe it’s been two years since our debut, but so much has happened during those years whilst at the RNCM as a postgrad, and I’ve been loving it! [This may seem like an obvious thing to say here, but I’ve never been reserved in giving a large portion of thanks to Samling for being at the RNCM in the first place (especially as I’m soon to join the Opera North chorus this August for The Barber of Seville!).]

So, back to what I’m supposed to write about, this production! It’s now day two and there’s been no hesitation in getting stuck into things. We’re already over halfway through the opera including the most complex scenes. Even on day one, before I’d unpacked, I was working with Dena on my frog dance solo… Yes that does say frog dance solo! It’s quite athletic, meaning I’ve left some rehearsals feeling somewhat exerted, to say the least… (I now have a new found respect for how fit dancers must be). But I’m secretly enjoying it, behind the heavy panting and red face. I just hope my tweed suit can cope with it!

My characters, the teapot and the treefrog are great fun. They’re both hilarious in totally different ways. One’s a boisterous faux-Englishman, who is perhaps a little self-obsessed. The other maintains a more vacant disposition, lost in his own world, but is instead obsessed with flies. They make for what feels like quite honest and simple characters which are, especially in opera, quite refreshing to play.

It’s been a fascinating dynamic to have the addition of a dancer and choreographer on the directing team. Often we singers can become so obsessed with what’s on the page and how we’re ‘supposed’ to behave or sing that it can sometimes get in the way of truly bringing things to life. Dena’s perspective as a dancer is interesting because of the way she relies on a more visceral ‘feel’ to interpret scenes and characterisation; an especially useful approach in an opera that relies so heavily on animalistic and childlike portrayal. It has been so interesting in fact, that I may be taking up dance classes very shortly… Watch this space!

Now it’s time for some much needed sleep as I’ve got some classic Charleston dancing to get stuck into, this time in the form of a Wedgwood teapot. Wish me luck…