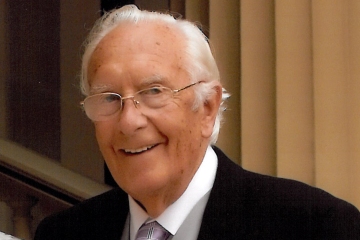 It is with great sadness that we said farewell to Bob Bowman in February. As a Trustee and a generous benefactor of Samling from the charity’s earliest days, he was at the very heart of our organisation and will be greatly missed by us all.

Bob trained as a pharmacist and after National Service with the RAF he returned to Carlisle to run the family’s pharmacy chain. In his spare time he trained as a singer under the distinguished English soprano Ena Mitchell and as a fine tenor performed in concerts and recitals across the North of England and Scotland. As chairman of Carlisle and District Music and Drama Festival and president of several choirs for many years, he made an enduring contribution to music and the arts in his native Cumbria and far beyond.

‘We all bore witness to Bob’s greatness of heart, wonderful sense of humour and his passionate belief as a pharmacist that ‘music makes you well’, said Samling director Karon Wright. ‘A great spirit and a very kind man, Bob also recognised the inspiration music can bring and its importance in the developing lives of young people.’